I didn't find the right solution from the internet.

My only regret but had to sell it was a 1984 Les Paul custom Spot light with low serial number. 009, The only way I could tell it was mine was the first 0 had was missing the top part of the number. I was like that when I bought it in 1984. Limited edition, only 52 were made. I bought it new for $899 (it list for $2000) but the store had it for so long it did not move. Not a damn thing wrong with it. When I was going through a divorce in 1999, I sold the guitar and got back what I paid for it. What a loss. It is even more painful to find your old guitar on Reverb. Yep, that guitar in the reverb page was mine. It is sad to see the condition it is in. It was still in mint condition when I sold it. I like the claim on the case though, that is not the original case the guitar came with. I did miss the guitar after selling it, but I did not miss the weight of it. When I saw the price it sold for.... that was a slap in the face, a good slap at that.

Honestly I have had a few guitars that I bought and later sold for the simple reason that I didn't like them enough to play them much. And if I had any of those guitars back I'd probably sell it the next time I ran short on money and needed to raise cash fast.

Of all of them, the Knaggs Kenai (tier 2) in Winter Solstice is the first one I'd buy back but not for a penny more than I sold it for. And it IS a really great guitar.

I had a PRS Employee Guitar, an SC245 with a quilt top. It's another great guitar. But though it was pretty much an example of perfect craftsmanship and played and sounded great, it never rang all my bells so I'd probably only buy it back if I got a discount OR a fairly large lottery win and had money to waste.

I've had three Strats, two of them being early 80s Elites. Great clean tones, not great in overdrive. Pretty guitars, though. If I played clean primarily I'd have probably kept one of them.

I build my own guitars. Every guitar I own (seven) is one of my own creations. They just keep WINNING when compared to anything else that gets into my hands. And there are more in (slow) production in my garage shop.
Top 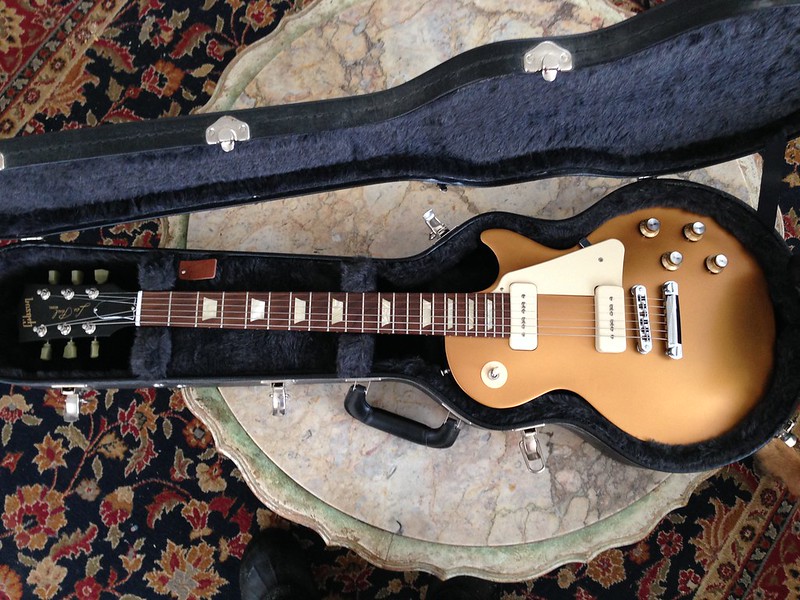 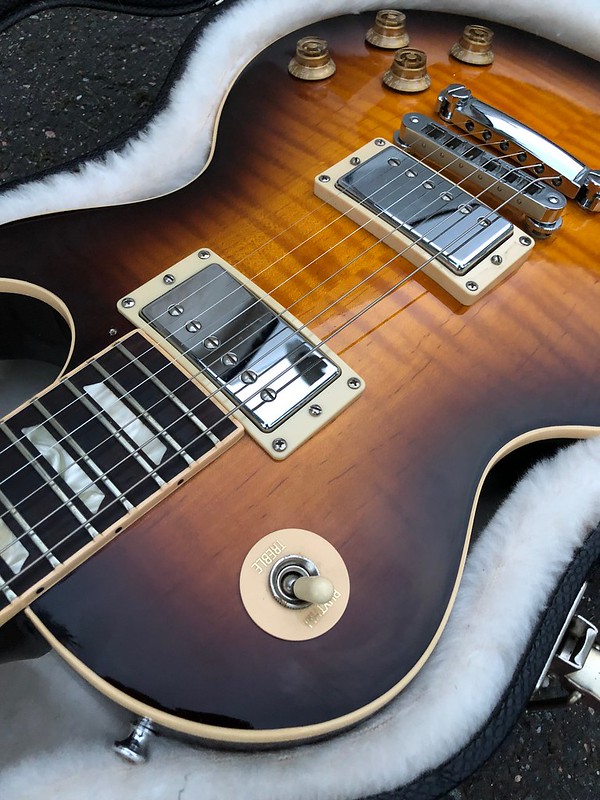 Ibanez JPM100P3 i miss sometimes. But it got replaced by R7 les Paul with good price so that’s kinda good.
Gears do rotate
Top

1984 Gibson Explorer Heritage Series. Busted my butt at my first job pushing carts as a kid for an entire summer.
Cost $525 brand new and the music shop ordered it once I paid $450. I visited that damn guitar for weeks just to look at it.

I walked into a music store and it was sitting there on the shelf. It was a real Les Paul body with a Japanese "Maxx" Neck. Came with DiMarzio Super Distortion pickups. The guy who put it together eventually became the guitar tech that I took my gear to for the next 15 years.

Worked a crap stock boy job in a liquor store all summer to save up the money. My dad said I was nuts for buying it. I used it on every recording I did from the moment it came home all the way until 2010. I used in in Jazz Band in college and even performed music for a college play with it. I also put a Jolly Roger sticker over the Maxx headstock logo - It was a Pirate guitar that took no prisoners! Arrrrrr!

It survived a series of mishaps. The guitar was accidentally dropped inside the case one time by someone carrying it for me, but never had even the slightest crack. I once was sitting in a chair that let go under me and while I landed on my ass, the bottom edge of the guitar bounced off of the tiled over concrete floor but again...not a crack, dent, or scratch. It seemed to be the "Bluesmobile" of guitars. Until one day....

The guitar's neck started twisting and needed to be replaced. I tried to convince said guitar tech to replace the neck with a real Les Paul one but he said the cost wasn't worth it and I should just buy a new guitar. In all honesty, I think he just didn't want to do it, despite me being willing to pay for whatever was needed to make it work. So he recommended putting .011's on it (I'm used to .010's) to see if it would straighten itself out, but after almost a year of that he said it was just getting worse.

Epiphone Genesis from sometime in the 70s. Bought it for like $250 during my Church of Magical Japanese Junk phase, sold for the same at the end of the phase. I went through lots of weird Matsus and stuff and I'm not sure why this one was special, but it was. It just had a sh!t-ton of mojo ,and played better than it had any right to. Sounded punk as f%&# through a Mark III, too.
Dual Rectifier Tremoverb 100 Head
MkIII Green Stripe DRG
Royal Atlantic RA-100 Head
Recto Trad 4x12
Also owned: Rec Pre, 20/20, Bottle Rocket, a bunch of Mark IIIs, a bunch of Rectos, a bunch of Mesa cabs, a bunch of other amps
Top

I really only regret selling one guitar...an early Epiphone '58-59 Flying V. It was a great guitar! It didn't have the rubber non-slip strip and the pickups were unpotted and sometimes fed back at high volume but it sounded great! I used to love taking it to jazz gigs just to see people's faces..."Oh my God! Did we hire the wrong band?" It was a great jazz guitar; so woody sounding! I sold it to pay some overdue rent. I wish I had opted to live in my car! I paid about $300 for it and now they go for $700-800 and up! Oh well, live and learn!
Stand and Deliver!
Top

I'm not sure if the current selling price plays a role in regretting (crazy money for the real value of that guitar) but i used to love that UV and i 'm not sure I'll get another one.
So sad I let her go...
Top

I had a '81 Les Paul Custom in SilverBurst that I bought for $1000 in 1993. In 2000, I sold all of my electric guitar gear (including a TremOVerb head and cabinet) because I had no place to put it after I moved out of my house in MD to a tiny apartment in RI. The guitar was kind of a dog, but it was in great shape and sounded amazing. I thought I'd try to replace it, but seeing the Adam Jones craze and how much they're going for these days...forget it.
Top

The only guitar I can really think of parting with is a 1962 Telecaster that I paid $600 (Canadian) for in 1984. It was mint. But really I'm only sad that I didn't hang on to it for about 15 more years. When the prices went insane I would have most likely had no problem dumping it and replacing it with a custom shop.
2 other guitars that I regretted parting with is a Marin D-18 Authentic 1939 and a Custom shop 52 Tele. But I rectified that. A year after I sold the Martin I saw it for sale on Kijiji. I had sold it to someone I knew that lived a couple hours from me and recognized that it was him selling. I called him up and we met up and I got it back.
With the CS 52 Tele I regretted selling it the day after I sold it. I've owned a number of Custom shop teles and nocasters that had come and gone but this particular tele was very special and for me was "The one" and I never should have sold it. I knew I'd have to replace it but wasn't confident that would be easy. I had the business card of the guy that bought it so a couple days after I sold it to him I sent an email "Just thought I'd drop you a line and see how its going with the Tele. If for any reason it doesn't work out I'd be glad to refund your money".
He emailed back that day and said he was enjoying it and that he'd likely hang on to it. Well I was a bit deflated and figured I'd have to move on. Then 2 days later he emails me back "I think I'll take you up on your offer to take the tele back". I arranged to meet him that evening and got my tele back. That was a couple of years ago and I will never make that mistake again.
Top

..I am not the regret type, what is given away without anger will come back one or the other way. ... one I would like to see again is a Hoyer M28, hollow thin body, two single coils, one venezian cut type ... I sold because I didn't know anything about setup then (late 70s ...) I found a nice Epiphone Sorrento that is doing its job quite well, but is missing the exact kind of vintage feeling and mojo (you can't add pics here that are not located somewhere else in the net??
Top
Post Reply
15 posts • Page 1 of 1