It wasn't until now, 35 years after I began my guitar adventure, that the right deals came along at the right time when I was interested.

So, finally, I got my first Marshall. And my second one just a week later.

The first one is a JMP 2203 100 watt master volume model made in 1977. Nearly completely stock, its only mod was to get rid of the unreliable impedance selector socket and replace it with a rotary switch. But the mod was done poorly, however it is 100 percent reversible with no holes added to the chassis. Still has the original filter caps...and that's an issue. But they're Dalys, super high quality caps that haven't failed yet, though they are showing their age. New ones are on order.

Nonetheless, I've still played it. And it's stunning. Totally unlike any other amp I've ever had to date. I've had a fair number of Mesas and still have four. Mark III, SOB, Triple Recto, Rocket 44. My past Mesas were another Triple Recto, a Studio .22, and a Mark IIA head that I'd love to find and buy back, serial number 3116. It's an HRG with modern style knobs. See it? Contact me. I want to buy it back.

The Marshall is an amp that simply has to be played loud. If you're not going to crank the master up to at least four, you won't understand what it's all about. With the master around six, it's insane. It's not the volume, which IS nuts, but it's the touch sensitivity and responsiveness that is special and different to me. Pick attack changes and volume knob adjustments make the difference between loud and clean or HOLY HELL that's rich overdrive! ...and anywhere in between. That responsiveness is lost in higher gain amps that are so saturated that a clean tone is basically not possible in that channel.

And then there's the second, a 1973 edition model 1959 Superlead. A few years newer, it's still the same model as everybody's favorite, Eddie Van Halen's original Marshall that we've all hear so many times. It has a switchable master volume that was added to it, fortunately also fully reversible,
and also featuring its original filter capacitors that despite being 46 years old, are still doing their jobs, too. (Replacements are on order for this, too.)

The Superlead is even more different. Running it in "stock" mode, with the master volume defeated, and both channels jumpered together, which is done not for more gain but to blend the very different voicings of the two channels (two being much darker) into a tone that suits you, you really have to get both volumes up past halfway to hear what this amp is all about. It has one less gain stage than the master volume 2203 but when it hits power stage overdrive, things get intense anyway. Loud? Well...YEAH. Better wear ear protection. (Recommended for the 2203 as well, but its tone is warmer and a bit less abusive to the ears.) The Superlead has a different character when you play it, more explosive, stiffer, but very rich and very classic sounding, as good in its own right as the 2203, maybe even better if you can handle the volume.

If your direction is more Van Halen-ish, the Superlead is probably the better choice. For classic rock and stuff like AC/DC, the 2203 is the amp I'd pick. But I've picked both.

The Superlead will be undergoing a fairly thorough restoration. Somebody painted over the tolex and all the trim pieces. It's going to be restored to as it appeared in 1973.

I've identified a need for reproduction front and rear Marshall JMP metal panels. Hardly any are available. I have a system to make high accuracy replicas quickly and at very reasonable prices, for every variant of these panels. And there are a lot of variants. So buying these Marshalls has also created a business opportunity for me to provide restoration grade replica front and rear panels.
Top

So you have a JCM800 and Super Lead. So basically you have 2 of the 3 Marshall classic amps, my favorites. The trifecta would be a Marshall Blues Breaker or JTM45 and you are set.
Top

Yup there is something about those pre-JCM900 Marshalls. Took me a good 20 years to figure out too. My RA100 blue channel can make any sound that my JCM800 can make, you wouldn't be able to tell the difference on tape, but the feel of playing the Marshall and how it sounds in the room are completely different. They can SOUND like the same amp but they don't feel at all like it.

Like you said, the gain structure of the Marshall allows you to do a lot more by backing off the pick attack or tweaking your volume knob.

Another big one, which would be a "take my money!" thing for me, is JCM800 faceplates, mainly front faceplates, for people who've flipped a combo into a headshell. I would drop a hundred for a new metal front faceplate.
Dual Rectifier Tremoverb 100 Head
MkIII Green Stripe DRG
Royal Atlantic RA-100 Head
Recto Trad 4x12
Also owned: Rec Pre, 20/20, Bottle Rocket, a bunch of Mark IIIs, a bunch of Rectos, a bunch of Mesa cabs, a bunch of other amps
Top

I've been super busy getting my ducks in a row. My Marshall (JMP era to start) front and rear panels project is taking off, with my first production run due to be delivered to me this coming week. I'm going to make the retail debut at the Orlando guitar show in the end of January/start of February next year.

Not only is the Superlead getting a TOTAL restoration, going all the way to having stripped down the chassis to bare metal and having had it re-galvanized and yellow chromated, I'm also redoing the top and bottom cabinet pair (1960A and 1960B) and the head cabinet is newly made to Plexi specs, correct for a '73 Superlead. All are being done as you see them, in purple, gold, and pinstripe grill cloth.

The head cabinet is a Sourmash product. The 4x12 is my own work. I'm doing pretty good cabinet and tolex work these days.

This will be my attractor at the show. Purple full stacks DO attract lots of attention. That'll bring them to my booth, and then they'll see my restoration parts offerings. I may have some new built guitars of my own to show as well.
Top

That purple is a thing of beauty!

It also took me many many years to aquire a Marshall.
Now I have 2 and a Mesa as well!
Things are looking up for this old guy.
Top

I bought this cabinet, sounds awesome. 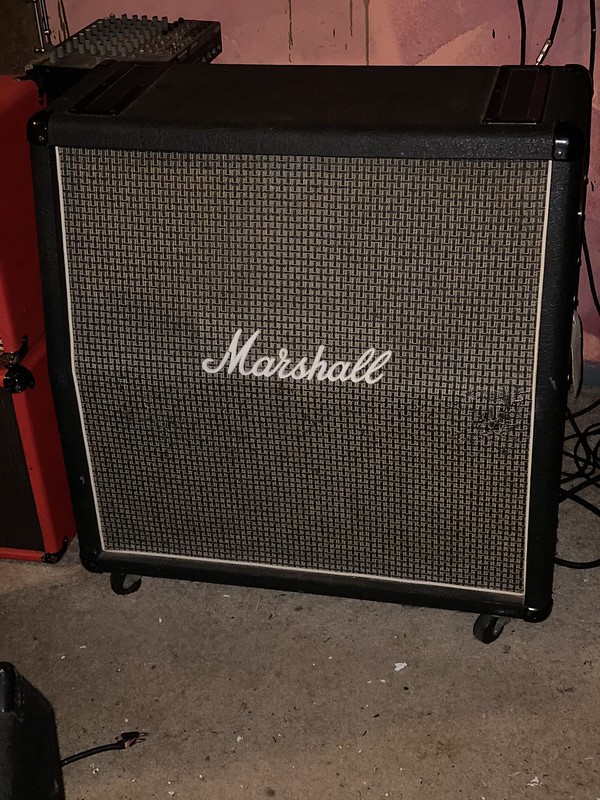 
The Creamback speakers have the R/C, which stands for Rola/Celestion, cones. 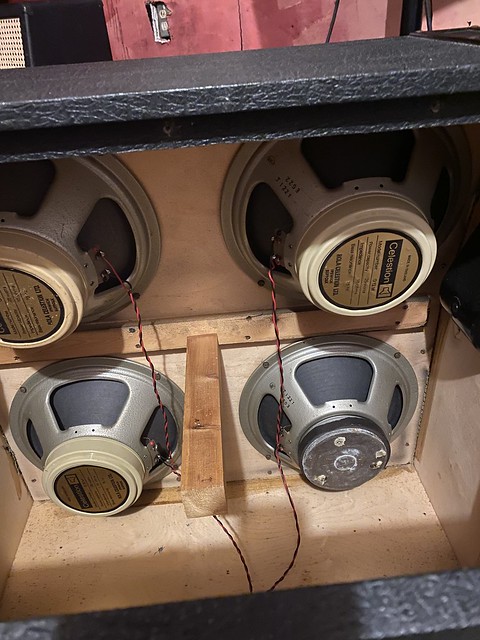 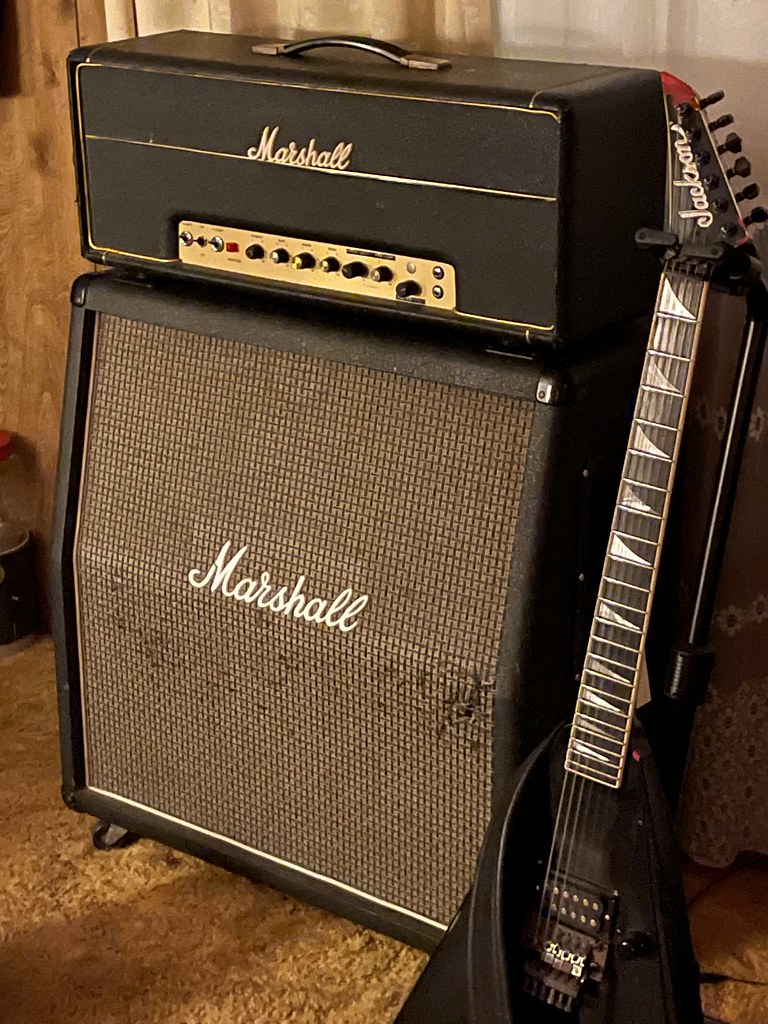 How's that 50 treating you? Some of Lee's mods were good some not so good. That Rhoads is legit af bro!
SG IIC+/++
DG IIC++
KG IIC+/++
Certified pre Gibson
Top

I like the Marshall but I want to send it somewhere to have it modded a little more to my liking. I sent some emails out and didn't hear back from any of them.

It has an overall good sound but it is dull and dark. I'd like to have it rival my Boogies. I'll eventually find someone who can give it a check-up and brighten it up.