I'm really interested in both. They look awesome and have great features.
The fact that Stephen appears from nowhere, is sentenced to death in an emotional public trial without anyone interfering at all and is then altogether forgotten as if nothing happened, is already suspicious.
Top

I was trying out some new gear just for fun. New video cameras to capture what is going on. The switch track works great. Can't say much about my guitar playing skills though. I was just noodling around basically with no intent show off. Also had a few settings on the recorder. Since I was using two mic's on each cabinet, I had one of the mic preamps set to be out of phase on the TC-100 cabinet. Not intentional but wound up being recorded that way. Set up was different and must have bumped the phase function when I was adjusting the input levels for each channel. Opps. The TC-100 sounds identical to the TC-50 but in the recording it does not.... I should just delete it and do it over again... but here is the Switch track in action. TC-50 was on circuit A and the TC-100 was on circuit B. Both amps were set up in left and right channels but I also had two mics capturing the room so that stereo effect sort of got eliminated. Not perfect but you will get the point. The only noise I picked up from the Switch track was the footswitch button being captured by the room mic which was very close to the floor. It was also picking up the triple crown footswitch too. So far I love the Switch track. Much better than what I was using before.

My Switch Track should get here this week. Looking forward to comparing it sound wise to my Radial big shot.
Top

How did the comparison turn out? I have the Radial and I'm really interested in the Switch-Track.
...Bleed Boogie forever...

Tone wise no difference. The midi features is what i bought it for. Had it awhile now and can't fault it. Works as advertised and easy to set up.

Here is a pic of it in my pedal drawer. 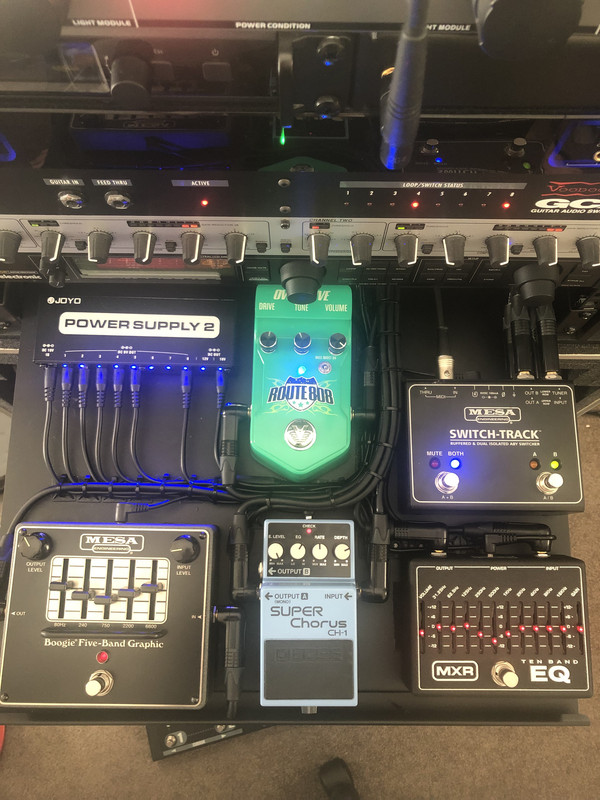