How the CAT or CT sounds like relative to a Mark V clean channel? Quite different. MKV Clean and fat, still different. MKV Tweed voice not even close. Come to think of it, the Roadster also has a tweed voice. Nope, not the same thing. The trick to this amp is the speaker (in part). It has a nice sparkling chime that I cannot get with a ceramic driver. Also has a bold bottom end with balanced tone though out, not flat like an EV but close enough. Tried it though the V30 loaded cab, MC90 in a widebody open back cab, EV in a 112 cab, and the Organic Timbre Rhapsody in the Mark V. The closest response to the Blackbird speaker was the EVM 12L. Second closest went to the V30 in the Vertical 212 cab (yeah, you did read that correctly, vert 212 has good overall balance of tone). The MC90 was ok but offered too much low end pick attack. What amp sounds very close to the CT was the TC-50 running the clean channel loaded with EL34 pushing a blackbird I loaded up in the open back 112 widebody cab. I actually liked the TC-50 with the blackbird on the clean channel (normal or drive). Since I removed the blackbird from the extension cab to install the MC90 just for that "what if.." thing. I did not like it that much. Mesa definitely got a good match with the amp. As for a Lonestar, never really played though one. Clean channel on the RA100 is almost similar as I can dial it from clean to gritty. I think the range on the RA100 is a bit more than the CT. Without any pedals, the CT does grind quite well but is a softer clip that what you would get with a different amp. Considering there is some similarity of the RA and TC, I would not doubt that the Dyne would not be far off. Tone is a bit more neutral than a British Voiced amp but surprisingly the TC-50 is much closer than I expected it to be (through the blackbird speaker of course). For those wondering what was sitting next to the Cali tweed in the first picture, here is another angle but without the pedals in the picture. As a size reference, it is basically the same size as a Mark V combo, perhaps an inch or so taller but that is about it. Also not as heavy either. I will be working on making a video soon, just have not found the time to work on it. I will shoot for this coming weekend if possible. Also have been working on my strat in correcting noise issues as it has been a problem since day one (waiting on materials to shield the cavity and pickguard). My other strats do not have single coil pickups as they are some form of humbucker. May end up changing that as I really love this amp and how the strat sounds through it. My other guitars sound great too. Have two models I have not tried yet, one with active tone controls, Carvin DC400 and the other is a Kiesel DC600 with piezo Floyd Rose Ghost bridge. Difficult to say how I would rate the clean channel vs the other Mesa amps, very similar but yet not the same. It is not all about the speaker exactly as I did try it though other common speakers. That blackbird is part of the gooey filling along with the 6V6 power section, the preamp is the cake part and the covering is the icing on the top.

You people were close..... Not a Lonestar, getting warmer on the Electra Dyne.... 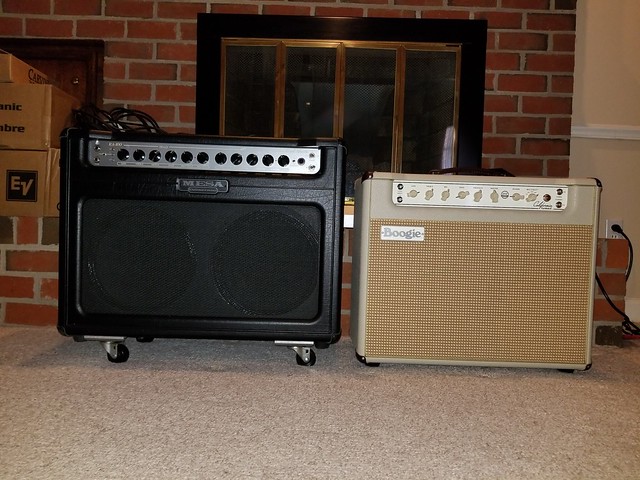 I am also enjoying the California Tweed combo I purchased a couple of months ago. This is my second Mesa amp - I have owned the Express + 5:25 for about five years now. I love that amp and purchased the California Tweed to enjoy some new and different tones, not to overlap with or replace the Express. I have found the two amps to be very different, each great in its own way.

It took me some time to get a handle on the controls. But with some experimentation and the owners manual I have hit on a range of rich clean and overdriven tones. I have been setting the mids and bass low, around 9:00 plus or minus, and the treble and presence around noon, plus or minus, and adjust the bass with the gain. The master volume and multi-watt selector work great together.

I haven't found the need for a lot of pedals with this amp. Sounds great on its own. Have only been using a tremolo and overdrive so far. I have been running the combo in tandem with my compact widebody closed back cabinet. They sound great together.

Any other new owners out there? It would be nice to hear from other people on their initial experiences with this amp.
Top

Hi there!
I own the Express+ 5:25 as well.. brilliant amp!
I am now looking for another amp to get more various of vintage tones.
can you tell me what the difference between the Fillmore and the California Tweed?
Top

Zeldoom wrote: ↑
Sun May 12, 2019 12:51 am
Hi there!
I own the Express+ 5:25 as well.. brilliant amp!
I am now looking for another amp to get more various of vintage tones.
can you tell me what the difference between the Fillmore and the California Tweed?

Sorry but I did not demo the Fillmore. I was not in the market for another multi-channel amp.
Top

What I love about the California Tweed is that it seems to capture the best of both worlds of Mesa and Fender. I do not own the California Tweed combo, but I do have the Tweed 23 1x12 cab with the same Jensen Black Bird speaker. I cannot believe how amazing this speaker sounds! Some of the most timeless Fenders, such as the Tweed Bassman and Deluxe, the Twin Reverb and the Deluxe Reverb, were originally loaded with Jensen speakers. The Black Bird is rich and full, with great bottom, but has those sparkling, chimes Fender highs. I would say the California Tweed has everything a vintage Fender has, and then some...
Top

I just picked up this 2 days ago. Sounds good so far at low, and medium levels. I still need to play through it with the band. So far I've only played my Les Paul straight into the amp. 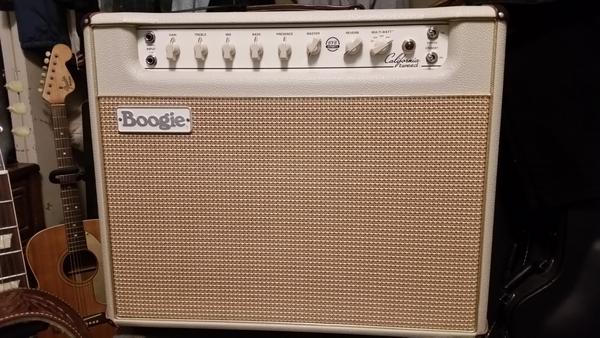