Hi there, it's been a while since I last visited the forum. Lately, I ve been recording my blue stripe using the Surh Load box + torpedo cab. It sounds amazing with the right IR, but I ve come to the conclusion that it's too bright! In the past I would set the presence really high but I ve been doind the opposite for some time now, setting it at about 2 or even 1! Also I tend to set the 2200 and 6600 really low like cut them completely! So I ve been wondering maybe it's time for me to A - either mod it to the red stripe
B - buy a mark IV and A B em to see if the mark IV records better.
Don't get me wrong I love my mark III but I think I d be better off with a not so bright amp!

I don't play live , I am a bedroom player and I mostly play 80s 90s thrash. Thx in advance! Cheers! Here are my latest clips
https://hearthis.at/ultimate-metal-guit ... -dragon01/

I haven’t heard a III. But I recently got a IV rev B and it records superbly. Like instant perfect tone. Didn’t require any mic tweaking. The right amount of bite, clarity and heaviness.

My only issue with the IV, at least with mine, is the output knob is ultra sensitive with a terrible taper so it’s good bedroom volume from 0-1ish anything above that gets ‘stadium’ loud almost instantly. If you’re using s load shouldn’t be much of an issue.
Top

I only picked it up recently-ish (about a month ago) and still very much getting acquainted.

As you know for anyone that's had a mark before it's easier enough to understand the tone controls and set bass low treble high etc etc, but it's another thing to understand how each of the pull pots interact, each section of the poweramp settings etc and then there's dialling in the EQ just right. This can takes months and sometimes years... lol. Nonetheless, I'll put one up soon. Prefer a compare video? or just general recordings? And can do in room or mic'd as well so let me know your preference.

So all that said, I'm still exploring and making up my mind on whether each mark stands in the pecking order, for me anyway. As JP so aptly said in his studio tour, not that ones bad, just varying degrees of awesomeness. And all unique characters.

My general and initial thoughts so far:
- My c+ is by far my favourite and the JP, V or IV have not changed that opinion. The order of the rest is TBD and to be honest - all of them put a massive smile on my face everytime I play them.
- The IV has the classic Mark openness that won't really find in the new marks (since releasing the V with the vol 1 omitted). JP is in between, mark V being the most compressed.
- The IV has a very unique grainy tone that isn't in the II or III. The distortion feels very rich and broad, albeit maybe a bit thinner than the II/III. Not necessarily better - just different. You may prefer this, you may not, you may be indifferent. The advise that'd you'd need to hear it in person can't be overstated. Also the attack isn't the same as the II with the II having tighter attack, can't speak for the III.
- I can see the evolution of the amps going from 1 channel (2ch shared control amps) with the II / III to 2ch amps with the IV (as Ch 1 / 2 share mid bass controls) to the V being the first real 3 channel amp.
- the IV really shone in recorded tone. Didn't have to tweak a single thing with the microphone positioning or settings on the amp. Straight off, for metal rhythm, it had the perfect amount of body, bite and chug.

Specifically for you, since you're coming from a Mark III, you won't get the benefit of all the fun that comes with vol 1 and all the pull pots since you already have them in your III. I played these amps for the first time after having a V and JP first so I'm still new to and very much enjoying these aspects. The IV isn't necessarily sweeter in tone so not sure you're going to take out the aggression or harshness you might hear in the blue stripe, although there are more options in the power amp for tweaking your tone and the distorion character is very unique. Depending on what other amps you have, if you truly need a clean and a metal channel the IV is superb, whereas the III I imagine would be difficult without changing settings. Integrating all 3 channels on the IV is possible but you might not get your ideal settings across both clean and rhythm 2 channel, but that all depends on what you want out of rhythm 2.

I’ll just say that I recently was listing my Mark IV B head for sale, as I hadn’t used it since I got a Mark III red stripe. I wanted to make sure everything was working properly. Plugged in and had forgotten how awesome it sounded. Even pushing the Rhythm 2 channel with a klone and running through a Creamback IR (had never done that before) was just killer. So I decided to keep both and took down the listing.

The III is more raw and open sounding, in the same way the c+ is. The IV is more refined and modern, has a more percussive chunk on the palm mutes which for me is the best of any of the Marks including the c+. IV is a lot darker especially the B version. It would be the darkest of all the Marks. Both are great. I think the blue stripe is fine as long as you knock the presence way back as you are doing. You could probably back off the treble too as it has a tone of gain anyway so you don't need high treble to add extra grit.
Top

I don’t find my Mark IV B terribly dark. Though I don’t have an ‘A’ revision to compare it to. My Mark III red stripe I’ve described as sounding ‘bolder’ than the IV. And the IV has something different going on in the midrange. Overall a bit smoother than the Mark III. But still plenty bright if needed.

This is a quick clip of the Rhythm 2 channel boosted with a Mythical Overdrive, through an IR of Creambacks, that I spoke of above:

I have a transition Mark 4 that has A & B elements. It knocks off any Mark amp I've owned. It's different than the other Mark 4's I've owned. It rules. When I bought it my drummer exclaimed, "Wow! That is the best amp you've ever used! My God, what a sound!" I will fire up the C++ every so often just to play it but,.... 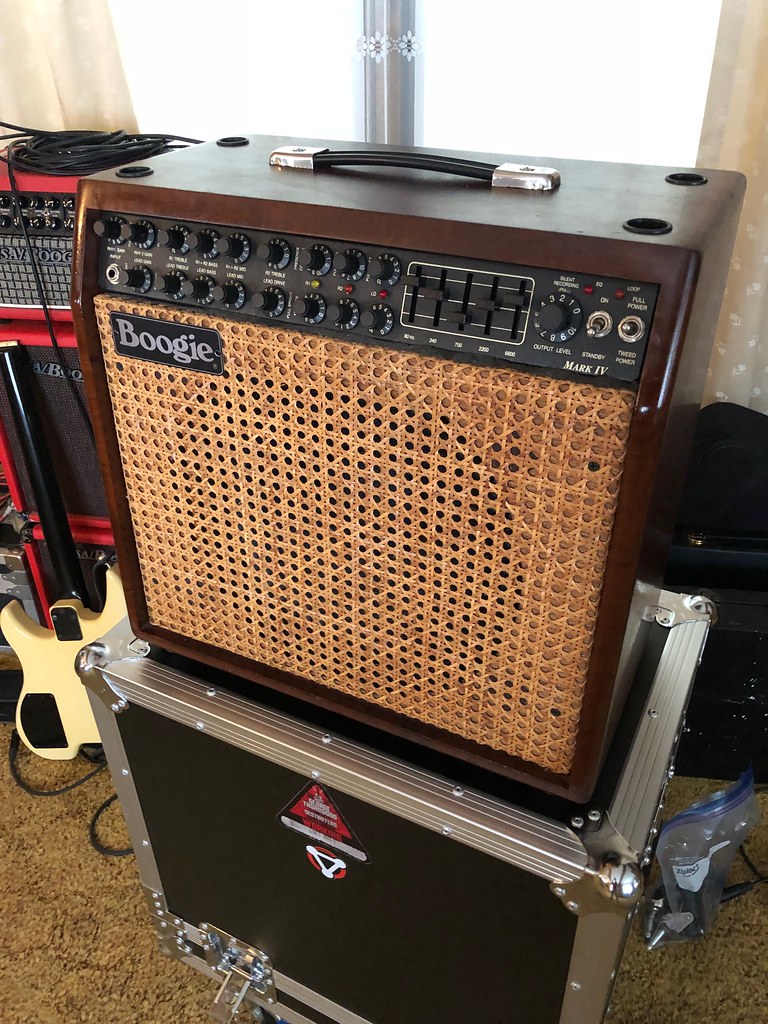 I don't regret selling it though..
Maintenance issues for such an old amp, tone inconsistency and ONLY 1 awesome tone, made me sell this thing. Otherwise it would just be a luxury keeping it.
Last edited by psihiatros on Mon Aug 19, 2019 8:40 am, edited 1 time in total.
"I'd rather be hated for who I am, than loved for who I am not." Kurt Cobain (1967-1994)

Curious to which channel is the one awesome channel. The clean and lead channels are grail tone all day on a Mark 4. I haven't found any amp that goes where a Mark 4 goes on ch.1 & 3. (I use ch.2 the most when playing live!)
JP2C, Mark llC++ DG, Mark IV-A/B.
Top

Maybe you love your amp to death, that's great.
For me, mk4 it's all about ch3. Everyone knows that. Ch1 clean is too compressed & second channel = who gives a f%&#

The blue stripe is the brightest Mark ever made. I actually think the IIIs record pretty well but for me are way too bright for home playing. I do love their open grind though, different from IIs and IVs.

The IVa is still a little harsh but still more organic. The IVb is where it started to get more compressed & darker.

Having your blue modded will not be as good as a red. BTDT. And, neither will be as smooth II. They're just different.