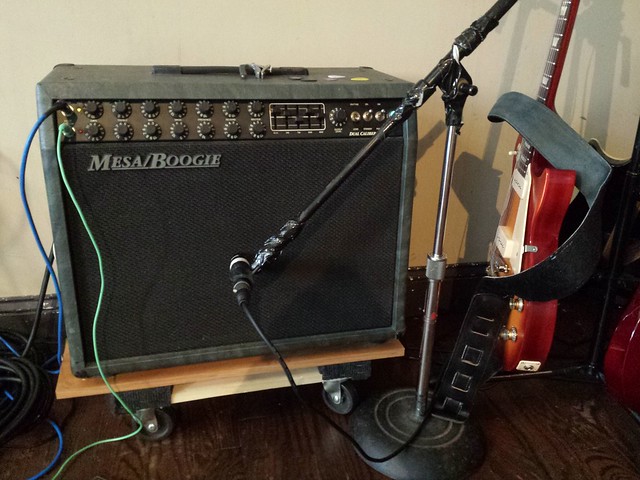 dodger916 wrote:It's an Eminence VS-12 installed in plenty of Mesa amps from that era. I run my DC-3 head through an Eminence MS-12 (150 watt speaker Mesa installed in Mark series amps) and love it.

Good luck with the amp. I love mine, especially the rhythm channel.

I had a friend who was looking to get rid of a DC-3. I had been gigging with a MkIV, which dragged me down my basement stairs at about 3am after a gig. Enough of that monster, I loved the way it sounded and it was sooo flexible I could get whatever I wanted out of it from most any guitar. But when an amp attacks the owner its gotta go. So I tried out my friend's DC-3, it sounded a lot like the MkIV, just like the MkIV I could get whatever tone I needed. Of course being a Mesa, it has plenty of LOUD.

The ext cab makes this rig sound special. Nice n thick especially if you place them a few feet apart. It's also been played thru a Mesa Blue Angel 4x10 and a Matchless 2x10. Very flexible amp. Footswitchable 2 channels plus foot switchable EQ kinda turns it into a 4 channel.

But hey, I'm preaching to the choir now. Please count me in to the DC-3 Club.
Cheers!
caddie2
Top

On Friday I bought a DC-3 and Thiele cab for under $400! They were cheap because the amp is in need of repair- it had no reverb, the reverb controls acted as gain controls, it was feeding back and making funny noises, the 80hz slider does nothing and the lead channel hisses loudly when you crank the gain.
Otherwise, the amp sounded great

I pulled up the manual and schematic and flipped the amp over to change the reverb driver/return tube and realized that the reverb cables had been reversed! I swapped them and the reverb is fine. It also solved the feedback and funny noises.

I feel kinda guilty. If I had known that was all that was wrong with the reverb I would've swapped the cables and been on my way.

In any case, there are still the other two issues to deal with.

With the Thiele cab it has a sweet clean sound and a HUGE lead sound! I didn't plan to keep the amp. I wanted the Thiele cab to use with my Studio .22+ but this is a better sounding, more versatile and easier to use amp than the Studio.

It's also heavier which might be a deal breaker for me- I have back and wrist issues.

Am I the only one who's Cartel logo is missing?

EDIT: Many many thanks for sending me the new logo!

Some time ago i posted in this topic my first "road worned" DC-5 which eventually i sold it to a friend of mine while at the same time i replaced it with a new one in mint condition.
But...last week i received a long time "searching"...a DC-10 head also in mint condition...
So...meet the DC family

DC-3 owner here. Since 2011. I originally purchased this as backup for my Black Pearl 30.
About 6 months ago I finally sold the BP as it was replaced by my DC-3.

Recently I thought my amp had a cap that was slowly dying. Come to find out a wire soldered to the input jack was shorting out against the chassis. So it's all good again!

Still works mug out how to PM from my phone.
Top

I would love to join the club too. My first Mesa was a dc-5 head that I still play today. I also recently tracked down a dc-10 head. Both are fantastic sounding amps. To me they seem to have a little more "grit" to them compared to the Mark series. Don't get me wrong, I love my mark iii and my iic+ but the dc series have a sound all their own.
Top

I'm interested in joining the DC club too. New to the forum here, decided to sign up after recent purchase of DC-10 2x12 combo!
Top

YaBoiMCaliber wrote:I've had my DC-5B Head since 2015. I've had the chance to compare it with some other Boogies: Mark IIIs, Mark IVs, Rectos, etc. and my amp just SLAYED them all! It's a shame these amps are severely underappreciated.

I know exactly what you mean. Had mine since 1997ish. I've had a Mk III, 3 Marshalls, a Laney, an original 5150, a Rivera and god knows what else I'm forgetting. Still, this beat up old thing does everything I need in one box. They should reissue them with two models. Original & a Monsta-Mod model. I'd lol but I'm stone cold serious.

New member, and I just picked up a DC-5B yesterday. I always wanted a Studio 22+, and when the DC5 came up for a good price, I couldn't resist. So far loving the clean channel, but still working on the drive channel, I think lower gain preamp tubes will get me to where I want to be.

The amp is in excellent condition, I got it from a guy in his 80's, and it had never left the house. I has some crackles on the pots and GEQ, so I will be addressing that over the coming days.

Overall, very happy, and I think this will replace my SF Twin Reverb, as I like the cleans so much, and the DC-5 is smaller and lighter!

I'm now thinking of getting a 1x12 to complement it, as a mini-stack, but not sure what cabs would be best tonally, and physically so they will stack nicely, suggestions welcome.
Current: Mark V:25 head