A few months ago I swapped out my Mark IV for an H&K Grandmeister 40 as my main live amp. There's a ton of advantages in portability, presets, onboard FX etc but there is just no matching that Mark IV lead tone to my ears - period!

I keep my Mark IV in my den and I've been back to playing it a lot recently, I'd like to ask you guys about your CH2 settings (crunch/orange). Obviously the clean and lead channels are legendary on this amp but I've never been really impressed with CH2. What kind of settings/pedals do you use to get the most out of this channel? I've tried clean boosts and various overdrives with mediocre results.

I don't use R1 as much as I used the Lead channel, but it does offer a really nice Plexi-ish sound to my ears. I will use it with the gain at 8 (pulled), treble 8, mid 5.5, bass 3, and presence 8. I use the graphic EQ to boost the bass, and gives it a nice, thick sound that can create a smooth distortion sound depending on my pick attack. I find the orange channel is good if you're looking for something in the ballpark of a late 70's, 80's David Gilmour sound (I'm thinking of the song Short and Sweet from his first solo album). Also, I find the orange channel can be used to play lead, which is something no one ever talks about. I find the Mark IV is so much easier to solo with than the Dual Rectifier solo head was. Instead of fighting the amp, I find the IV almost plays itself.

I will occasionally use an overdrive pedal as a boost, but it changes the sound of the channel a lot. I use a Boss SD-1 from Japan as my main overdrive, and I find I have to dial back the gain a bit on the channel if I use the overdrive pedal. I honestly don't do this a lot anymore because the Lead channel sounds so good without a boost.
Amps: Mesa Mark IVB Head, M̶a̶r̶s̶h̶a̶l̶l̶ ̶D̶S̶L̶1̶0̶0̶ ̶H̶e̶a̶d̶, M̶e̶s̶a̶ ̶D̶C̶3̶ ̶h̶e̶a̶d̶
Guitars: Fender Blacktop Telecaster, Amer. Strat with EMG SA
Top

Just got my MkIVB back from the guy I sold it to, and reminded myself why I love these. Great with the Thiele cab, and spectacular in combination with my MkIII black dot.

What I need is a MkIVA head: for me, it would be the perfect grab and go. Anyone got one for sale in UK/EU they don't mind shipping?
MkII eh?
Top

I just bought my second Mark IV three years after I sold my first. I found how to set this thing up after having just about every other MESA product come through my hands! It compliments my other Boogie amps and has it's own thing going on. Plus it is beautiful Bubinga and wicker. https://www.flickr.com/photos/100168049 ... ed-public/

This particular Mark IV-A is just outstanding, much different than my earlier Mark IV-B. It is one of those amps that goes to 11 on a scale of 1-10, if you know what I mean.
JP2C, Mark llC++ DG, Mark IV-A/B.
Top

After many years of wanting one, I finally got my own Mark IV 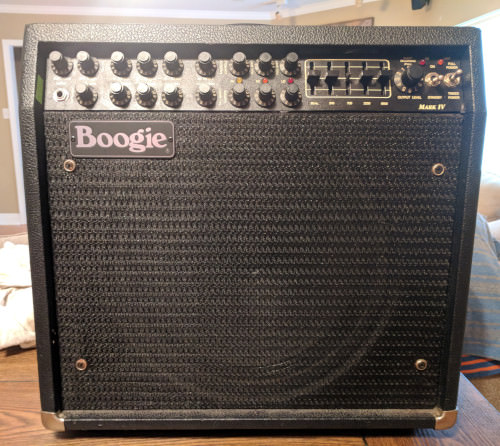 Considering buying a Mark IV wide body combo. I noticed the power receptacle on the back looks like what you’d see in a wall outlet instead of the IEC plug you normally see on stuff with a removable power cable. Is that normal for some Mark IV’s?
Top

I used my Mark IV at practice last night. 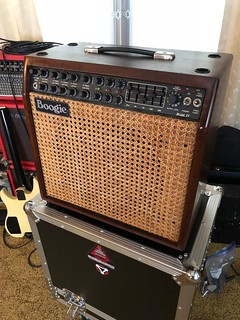 Mark IV A/B by John Bazzano, on FlickrThis amp is unusually incredibly great sounding! Seriously off the charts great where everyone comments on the tone and inquires on "how do you get that tone?" The other two IV's I've owned were not as good as this one. It might be tubes but whatever it is this amp is going have to be moved into a ATA case for gigging often. It is in a combo with an ATA case so it's got to weigh 110+ pounds.
And I thought it would be my living room amp.
JP2C, Mark llC++ DG, Mark IV-A/B.
Top

Mark IV A/B by John Bazzano, on FlickrThis amp is unusually incredibly great sounding! Seriously off the charts great where everyone comments on the tone and inquires on "how do you get that tone?" The other two IV's I've owned were not as good as this one. It might be tubes but whatever it is this amp is going have to be moved into a ATA case for gigging often. It is in a combo with an ATA case so it's got to weigh 110+ pounds.
And I thought it would be my living room amp.


What speaker is in yours? I’m looking at a used one that has Black Shadows. I’m hearing those aren’t very good at all.
Top

Electro-voice EVM12L. I'm trying out the amp today with a Fillmore 75 in a MESA 1X12 open back cabinet that is similar to the combo. If I use the Mark IV at places other than home, I won't port it around in the combo, I'll stick it in a ATA case or head shell.
Here is a video with EV combo, Fillmore 75 open back, & EV Thiele.

After spending GBP100 on an oil seal kit plus necessary machining, I still have the customary leak from the rear bearing area. I suspect the seal is not tight enough. The kit comes with a split carrier and a normal circular seal, which runs on the crank flange - enormous diameter of course After cleaning up the flange it was on bottom limit according to the blurb that came with the kit. It should have worked, but it didnt feel very snug to me. What experience do you guys have - either with or without the seal kit? I must say that previous engines without the kit have not been as bad as this one with it Total waste of money so far.
Top

This is a Mark IV.

I'm looking at a Mark iv with a serial number iv1206.
Any idea what year this was made??
Top
Post Reply
736 posts